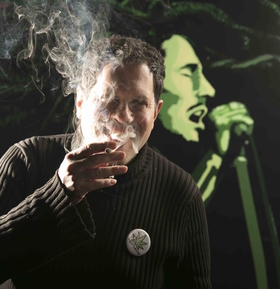 Buck Ennis
“Lifers Madness” The Movie Approves this message☮️
I tip my hat 2 U Doug. I light a candle for you this evening.
Doug Greene on set for Crain’s.

A lifelong cannabis activist who became a skilled interpreter of legislative language was killed Tuesday night on his way home from a concert in Central Park.

Doug Greene, 52, was the legislative director of Empire State NORML, the National Organization for the Reform of Marijuana Laws, and a paralegal at the Midtown law firm Shenwick & Associates. According to the Daily News, he fell onto the tracks at the 72nd Street subway station on Central Park West around 10:45 p.m. Tuesday and was hit by a southbound express train.

In recent months Greene had been a pivotal figure in the push to legalize adult recreational use of cannabis in New York state. He had lately stepped up his efforts in the hope of persuading legislators to pass a rewritten legalization bill before the legislative session ends June 19.

“He’s been working around the clock, communicating regularly with [Gov. Andrew Cuomo’s] staff, legislators and advocates,” said Noah Potter, a lawyer and cannabis advocate who had been a friend and colleague of Greene since the early 1990s. “He wasn’t an academic, but he was a student and expert on drug policy. If he didn’t know the answer to a question, he would know the person who knew the answer.”

Although he was a cannabis consumer, Greene had described his interest in legalization as rooted in social justice.

“I am a highly educated legal professional from the suburbs, and I’ve never been arrested,” he said during an interview with Crain’s in January. “But obviously millions of people have been affected by being arrested [for cannabis use], the vast majority of them people of color. It’s obscene to make people suffer those consequences for something that is relatively benign.”

Greene was the first activist to give a detailed reaction to the governor’s lengthy Cannabis Regulation and Taxation Act when it was introduced in January. His analysis of the bill was central to a story about legalization in Crain’s. He also posed for a photo, taken at a Midtown “smoke-easy,” that showed him wreathed in smoke.

Although as an advocate he preferred not to appear in photos that showed him smoking, he said he made an exception because he felt finding a role for public consumption was an important issue in legalization.

← News Out of Israel
Up in smoke: Why thousands of marijuana convictions were reduced and others were not →